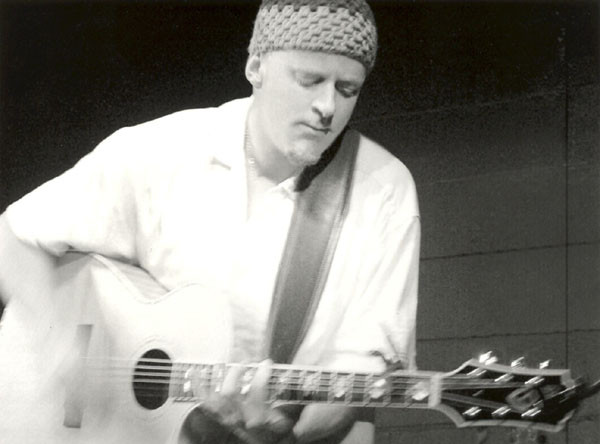 Like Greg Brown, John Hammond, Leo Kottke, Stephen Fearing, Richard Shindell, Kelly Joe Phelps, and so many others, Willy Porter is often at his strongest as a solo act. He does work with a band periodically, but given the economics of touring in recent years, he seems to perform more frequently accompanying himself with guitar and mandolin. Porter honed his chops the natural way, busking across Europe and playing every little coffee house and dive bar on both sides of the Mississippi. He's a veteran performer who takes his audiences with him on the journey. He elicits a rare kind of communication between artist and audience, mostly because he's able to read his audiences so well. Porter was raised near Milwaukee, and his first big breaks were playing theater-sized shows there and in Madison. As could be expected from someone from this part of the country, there's an element of blues in Porter's singing and songwriting and in most of his live shows, although he's best thought of as a contemporary singer/songwriter, straight out of the world of folk music. He began playing viola, a notoriously difficult instrument to master, in his youth, but found he lacked the discipline for classical music as a career path. He had a revelation in his teens when he found Leo Kottke's album, "6 & 12 String Guitar." Kottke's playing opened up new vistas for Porter, who began playing guitar after dropping his viola studies. In the '90s, Porter went through a period of being a rising star, but he has since settled back, comfortably, into the role of independent musician, recording for small labels and selling his recordings at gigs. Among the breaks he caught in the '90s were opening slots for the likes of Jeff Beck,Rickie Lee Jones, Tori Amos, Paul Simon, the Cranberries, and other pop and rock stars after Private Music/BMG re-released Dog Eared Dream and put their significant marketing and promotional forces behind Porter and his music. He's been joined on subsequent recordings under his own name by the likes of Ian Anderson and Martin Barre from Jethro Tull, who Porter opened for on a tour in Europe. After breaking on to the national scene in the early '90s through a lot of hard road work, Porter's discography includes upwards of eight albums, including How to Rob a Bank (2009) and Available Light (2006) for Weasel Records, High Wire Live (2003) and Willy Porter (2002) for Six Degrees Records, a San Francisco-based label. In the mid- and late '90s, he released three other recordings for Six Degrees, 1999's Falling Forward, 1995's Dog Eared Dream, and 1990's The Trees Have Soul. As the occasion or tour dictates, you can catch Porter solo or with a backing band of veterans from Wisconsin. On How to Rob a Bank, Porter is accompanied by Dave Adler, keyboards, Steve Kleiber, bass, and drummer/percussionist Dave Schoepke. Whether he's in your town as a solo act or with a backing band, one thing is sure: given his artful blending of blues, country, and traditional folk influences and his extraordinary fingerpicking guitar stylings, Porter will be a force in the worlds of Americana and contemporary folk and folk-rock music for years to come. He released Live at BoMa in 2011 with Carpe Diem. ~ Richard J. Skelly, Rovi