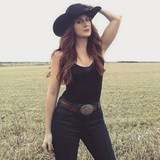 Raised in the boondocks of Kansas, Savanna Chestnut is a Country music singer/songwriter whose music reflects her roots. Growing up in a small farm town,

Savanna developed a love for the sweet, twangy sounds of old school country music, and that is exactly what she aims to bring back to the modern country scene. Savanna started writing and performing around age 13 and has been actively pursuing a career in music ever since. She has toured around the country playing at various bars and festivals, such as Cheyenne Frontier Days in Wyoming, Tumbleweed Music Festival in Kansas City, Country Stampede in Manhattan Kansas, and more. She has opened for acts like Tanya Tucker, Ned Ledoux, Sunny Sweeny, Ward Davis, Granger Smith, Restless Heart, and Shenandoah. In 2017 and 2018 she was nominated for Female Vocalist of the Year at the Rocky Mountain Country Music Awards. Her music has received air time on local radio stations around the country. Savanna writes her songs for, and about the folks that still love true country music. She brings a new, yet traditional sound to the table, and she will continue to share it with as many crowds as possible. Follow her on social media to stay up to date on her upcoming