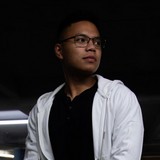 Shyloom is a composer, producer, and songwriter currently based in San Francisco, California. His music is all about the power of self-expression and connecting with others, fostering a sound that blurs the lines between a wide range of genres and ideas, including orchestral soundtracks, electronic music, and ambient music. His music channels the immediacy of electronic music, with the deeper sonic explorations of various textures and ambiances and the depth of sound that you would expect from a cinematic score. Shyloom’s music is notable for its heartfelt, emotional approach to composing, as well as the intriguing combination of orchestral instruments with synth-based soundscapes and other experimental sounds with a lot of attitude and personality. Find out more about Shyloom, and listen to the artist’s music. Debut release, “Take You Down,” featuring FJØRA, was released on the 8th of May via Enter Records.