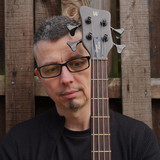 Minutes to Midnight is the moniker used by Simone Silvestroni, a music producer, bassist and sound designer. His latest album is After 1989: A Trip to Freedom, a real-life trip in history between two wars. It tells the story from his perspective as a grandson, who has only recently uncovered answers to how his grandfather managed to escape Germany in 1945. Professional Bio Minutes to Midnight is a session bassist and composer turned professional recordist and mixer. He specialises in pop, rock, blues, folk and singer-songwriter genres. Being a musician with a deep knowledge of the music process, he understands what songwriters need. Recent works: - Co-production and mix for Ember Rev's latest two albums: Premonition and Ruin and From the Country to the City to the Sea, as well as mix for the band's leader debut album, Hidden Music by Dan Ecclestone. - Bass for Antiquity in the album: The Experience and the new singles The Far Side of the Sun, The Evil Between Us and others. - Production and bass for Callum Gardner latest singles: Without You, Wriggle a Little, Hang Loose, and Commit to the List. As a composer, besides a long stint as a game audio designer, Minutes to Midnight released the concept album After 1989: A Trip to Freedom, and the companion collection After 1989: Demos & Outtakes, on the 30th anniversary of the opening of the Berlin Wall. Management: Christopher Carvalho / Unlock Your Sound Ltd. Official website: https://minutestomidnight.co.uk