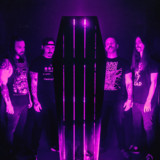 Florida’s THE ABSENCE came onto the scene in 2005 with their crushing, Erik Rutan-produced Metal Blade Records debut, 'From Your Grave'. The album and its three follow-ups, 2007’s 'Riders of the Plague', 2010’s “Enemy Unbound,” and 2018's comeback, A Gift for the Obsessed, The Absence showcase the perfect mixture of heart-wrenching melodies and skull-pounding aggression, while evovling their distinct sound, truly making them one of the premiere bands of the death metal scene. THE ABSENCE further ensconced their reputation via several tours supporting some of the biggest names in metal, including Cannibal Corpse, The Black Dahlia Murder, Amon Amarth, Goatwhore, Destruction, Deicide, Origin, etc. And now, without hesitation, The Absence return with their most deadly work to date - 'COFFINIZED'! Recorded by drummer and guitarist Jeramie Kling and Taylor Nordberg, respectively, mixed by Kling, and mastered by longtime Absence collaborator Jonas Kjellgren (Immortal, Overkill, Scar Symmetry, The Absence) at Black Lounge Studios in Sweden, one can still find a voracious group of stark individuals, in a void-bending combustion chamber of ravenous creativity. Every single song bears a torch of deprivation, darkness and ultimate triumph, furthering their distinct and evolving mark on death metal. Decibel Magazine had this to say about the album: “...It’s melodic death metal the way it’s meant to be: full of heroic guitars, gritty and glorious in equal measure."