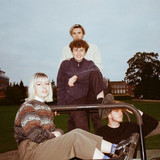 Sandcastle Jesus are a four piece guitar band hailing from Colchester, Essex. Inspired by the likes of The Smashing Pumpkins, The Smiths and The Lemon Twigs, their debut EP and follow-up single have already received several plays on BBC Introducing, as well as praise from established bands in their hometown.   Following the release of their debut EP, they released new single ‘Bombshells’, a song that shows a heavier, more mature side to the band. Alongside these successful releases, Sandcastle Jesus have also gained a reputation for being one of the most exciting live acts Essex has to offer, and in doing so have built a loyal and committed fanbase, who themselves have a growing reputation in the area for their raucous antics at gigs.   The band have recently begun working with a new producer in London, their first collaboration being ‘Bombshells’, and have exciting releases on the imminent horizon in 2021, which will show a new side to the exciting young quartet and cement their place as part of the resurgence of guitar music in the UK! 🍊