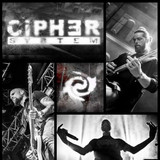 Melodic Death Metal collective, CIPHER SYSTEM, has announced the signing with Noble Demon, who proudly welcomes the band to their eclectic artist roster! Formed in 1996, at a time when the famed Gothenburg sound of Death Metal was at its peak, the band from Sweden has grown into relentless and remorseless mechanical perfection, playing their very own unforgiving sound forged with fearsome skill and precision. To celebrate the signing in glorious style and following their latest, critically acclaimed record - "Communicate the Storm" (Nuclear Blast / 2011) - CIPHER SYSTEM will release a brand new EP in early 2021 via Noble Demon (Digital) and Black Lion (Vinyl + Digipack CD). It will be the first release of the band introducing their new vocalist, no one else than Christian Älvestam of mighty Death Metalers Scar Symmetry, who will from now on join the band as a full time member. “We tend to keep our fans waiting and longing for more after every release. And the number 8 seem to be a number of importance. From that the band formed it took us 8 years to release our first album “Central tunnel 8”. Then it took us 8 years to release a follow up. Now here we are in 2020, 8 years after the release of “Communicate the Storms” with a new release. This time we teamed up with both Black Lion and Noble demon records for the release. We are very excited to have our Christian Älvestam onboard, and we hope you are too!” CIPHER SYSTEM comments.