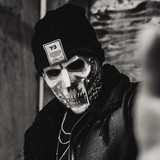 Shrouded in mystery, the REAPER project is one of the most exciting acts to burst onto the dance music scene in years. His sound can be described as chaotic, transcendent, and evil. The drum and bass influence coupled with modern sound design illustrates a dark, aggressive picture of what bass music can evolve into. The journey has only just begun, but the impact is already evident with support from industry leaders such as Illenium, RL Grime, Zeds Dead, Kayzo and more. Since the debut of his RAPTURE EP with Monstercat in the summer of 2019, he’s amassed over 7,500,000 streams across digital platforms with no sign of slowing down. The live side of the project launched in January 2020, debuting with Brownies and Lemonade at 1720 Warehouse in Downtown Los Angeles. Following the debut, REAPER was set to jump on over a dozen Spring tour dates with Kayzo in US markets from coast to coast. He has also been a fixture in the live streaming space. doing sets for Insomniac, Brownies & Lemonade, Monstercat, and more. REAPER is the voice of the future, the culmination of over two decades of bass. His music is a portal to the new era, the scene’s gateway to drum and bass.