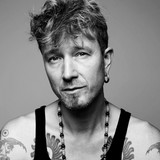 Stef Kamil Carlens is a multidisciplinary artist. He’s a singer-song writer, musician, composer, record producer and visual artist. He rose to fame in the 90ties as bassist and singer of dEUS, and later build a colourful career with Moondog Jr., Zita Swoon, Zita Swoon Group and currently under his own name. He released many albums and played hundreds of shows on national and international stages. He regularly works on scores for theater and films projects. In his plastic work he tries to be both his actual age as well as a child. Thus arise colourful worlds that unite the uninhibited and the melancholic.