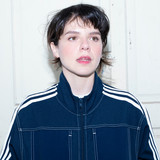 and proved she is here to stay. With music that combines Garage rock, pop and psychedelia and with lyrics that reveal exposed honesty and bleeding humor, Hila was crowned as the Israeli indie queen. On May 2018 Hila released her 2nd album "Advert Music" co-produced with Ram Orion. The album was made in collaboration with London based record label "Trashmouth" (Fat White Family, Warmduscher). “Advert Music” got fantastic reviews from the media and the crowd, Placing Hila as the ‘It Girl’ of the rock and alternative scene In Israel, reaching 1st place (local) and 3rd (international) in the Israeli biggest alternative radio station yearly hit parade. Hila made her first steps in Europe performing festivals such as CONVENANZA festival (Carcassone, France) and Garzen Festival in Vilnius. On March 2019 made a very successful debut Germany tour. Hila will be returning and touring Europe on September and November 2019. On top of the above, a short film based on Hila’s texts and music will be showing in Pictoplasma Festival (Berlin) and Annecy Film Festival (France).