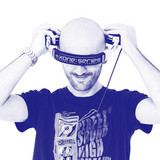 Rodrigo Ardilha is one of Brazil's leading personalities in the electronic music scene. Before starting his international music career in 2006, he was one of the most requested DJs in Brazil, playing in popular clubs and at major festivals. After several tours in North America, Africa, and Europe, Rodrigo moved to the Czech Republic in late 2015 - currently lives in Prague. In 2018 he signed a contract with SONY MUSIC, where he has released most of his tracks and remixes music, reaching worldwide charts as well as playlists from the world's top streaming platforms such as Spotify, Apple Music and Deezer.