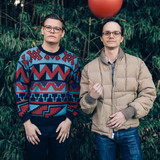 Welcome Center is a Philadelphia/Dallas-based electronic-pop band that formed in 2018. Jesse Smith and Aaron Sternick write, record and produce all of the band's music from Dallas and Philadelphia, respectively - a long-distance collaboration only made possible by 13 years of friendship and a cloud storage account. One of the very first songs the band wrote together, 2019’s ‘Is This All There Is’, embodies what makes their camaraderie click: the buoyant rhythms of early New Order, the throbbing house-influenced bass, and the existential dread of DFA records, meditating on the ephemeral value of novelty. Pop Matters called it an “instant hit.” Central Track placed it among the top 20 songs released by a Texas band in 2019. In July 2020, Welcome Center will release ‘This House Will Be Filled With _____”. The EP digs deeper into what the duo built on ‘Is This All There Is’ – five tracks of throbbing rhythmic grit, glimmers of swirling analogue flourishes, and Smith’s trademark moody and introspective lyrics. You can catch the band touring all over the South, Midwest and East Coast this year.