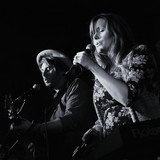 Hailing from Victoria B.C, Fallbrigade was founded by brother/sister duo Caleb Scott and Esther Jungclaus in the fall of 2012. Raised in Canada, Colombia, and Scotland the siblings’ sound echoes this adventurous and eclectic upbringing. Their music takes on a new twist of raw sound with deep lyrical weight and soaring heartfelt vocals. After years abroad they settled down in Victoria B.C and released their first EP “Greater North” in the fall of 2013. Feeling incomplete the band began to grow, they were then joined by writer/instrumentalist Matthew Jungclaus and drummer Nate Demetrius. Since the success of their EP they have released several singles and have been playing in music festivals throughout Canada. In 2016 they landed a publishing deal with the L.A company “Alcon Sleeping Giant” and have several of their original songs featured in various films. Some of which Include: “Together Now” in “Everybody loves Somebody”,

“Stay” in “Plan V”, and their most recent release from Universal Studios “Crazy Love” featuring Paty Cantu in “My Boyfriends Meds”. Locally they have also been thriving. They were recognized as “ The Zones band of the Month”, were broadcast live across B.C at “CBC Victoria's 20th Anniversary”