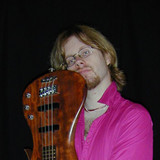 Long-time trusted bass workhorse Jari Riitala's musical solo output project is named simply Riitala. On these tracks Jari puts on his multi-instrumentalist hat and plays and sings everything (except for an occasional featured guest). Jari also performs as a part of Spotify artists Intergalactic Huso Orchestra, Oktoplus, Jastam Kastam and Lazybonez. In IHO and Jastam Kastam he is the main writer. The latest addition to the band list is the second incarnation of Fig Fable, who have already made the old material on the Spotify album their own, and are now rehearsing for recording the next one with music written by Jari to singer Lubena Nova's poetry. One sample of the new material has been released already, 'Sailing Away'. The collaboration with Lubena seems to produce also music not so suitable for the band so we created a side project Nova/Riitala that has no band format limitations. Its first release 'Rain Tunes' is out now as well.