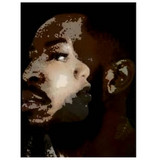 Mississippi's La'Porsha Renae is a passionate R&B vocalist who first came to the public's attention as runner-up on the 15th season of Fox's American Idol. Born in 1993 in McComb, Mississippi, Renae first began singing around age six, performing for her family as well as for customers in her mother's beauty shop. At age 16 she auditioned for American Idol, but did not make the cut. After college she married and gave birth to a daughter, occasionally working as a substitute teacher. Renae later revealed that her marriage had been an abusive one, and that her concern for her daughter's safety and her own well-being helped her end her marriage. In 2015, Renae successfully auditioned for American Idol in Little Rock, Arkansas with a rendition of Radiohead's "Creep." She was a fan favorite during her time on the show and ultimately made it to the finals, where she finished in second place behind winner Trent Harmon. Once American Idol ended, Renae signed with 19 Recordings/Motown Records. She also released her American Idol finale song, "Battles," which debuted at number 22 on the Billboard R&B singles chart. A remix of "Battles" was later used as the official song for the United States Women's Gymnastic Team at the 2016 Summer Olympics. Also that year, Renae released "Good Woman" as the lead single off her debut full-length. The song reached number six on Billboard's Adult R&B chart, and its parent album, Already All Ready, followed in April 2017 with a fusion of traditional and contemporary R&B sounds that recalled the debuts of earlier Idol breakout stars Jennifer Hudson and Fantasia. ~ Matt Collar, Rovi