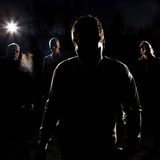 In 2004 two young men were sitting in a bar and talking about music. One thing led to another and suddenly they decided to form a band. Specific genres or styles were not decided, they wanted everything to be out in the open. Let’s see what happens. After numerous of demos, that all were really well received, the band decided that doing a demo will not satisfy the hunger for creating music. Full length album shall be done. The Oblivion Circle was released in 2015. That album showed that Lucidity had the will and the courage to do an album that was little different than the music they did before, yet still sound like Lucidity. The album was extremely well received and it got them to perform in places where they never performed before, and the knowledge of the band crew to unseen heights. Now in late 2018, the band is about to release their second full length album, Oceanum. With this album, Lucidity travelled further in musical exploration and added elements in their music that they never had. The same idea is still strongly there, that they had when this band started: let’s do whatever comes out naturally. So the influences are basically everything you listen to. And now in 2018, bands members music taste has grown quite a bit wider than it was in 2004. That is something that you will hear in this bands music. Now and forever.