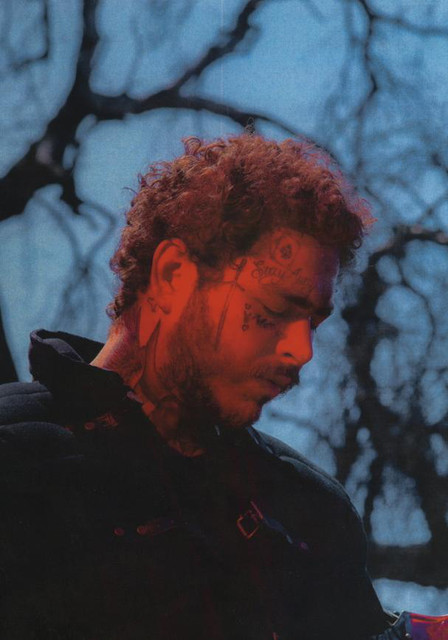 Within five years of his debut, American rapper and singer/songwriter Post Malone went from genre novelty to certified superstar, amassing a string of Top Ten singles with a hybrid style that joined his unique vocal delivery, pained lyrics, and hip-hop production inspired as much by Tim McGraw as Kanye West. After the release of his 2015 quintuple-platinum single "White Iverson" off debut Stoney, he quickly ascended to the top of the pop mainstream in the late 2010s with a succession of multi-platinum hits that included chart-toppers "Rockstar" with 21 Savage and "Psycho" with Ty Dolla $ign from 2018's number one, Grammy-nominated album Beerbongs & Bentleys and the Grammy-nominated "Sunflower" with Swae Lee from 2019's Hollywood's Bleeding. Raised in Dallas, Austin Post loved a wide range of music from a young age and planned on joining a band thanks to the video game Guitar Hero. However, when his dad gave him a copy of Terror Squad's hit "Lean Back," Post decided to become an MC. He hung with Dallas crew the IRAS until a move to the West Coast dropped him in Los Angeles. After putting some braids in his hair, he coined the term "White Iverson," and when he posted the track in early 2015, he hit a million views within the month. Post signed with the Republic label later that year. In 2016, he released the single "Go Flex" along with his official debut mixtape, August 26th. Months later, his first studio effort arrived. Stoney featured guests ranging from Justin Bieber to Migos' Quavo to Kehlani, peaking at number four on the Billboard 200 and later achieving multi-platinum certification. Following the success of his debut, Post issued the chart-topping singles "Rockstar" with 21 Savage and "Psycho" with Ty Dolla $ign, which reached a combined total of 13-times platinum. Those hit tracks landed on his sophomore follow-up, Beerbongs & Bentleys, which dealt with his rapid climb to fame and all its trappings. The set reached number one upon release and was later nominated for Album of the Year at the 2019 Grammy Awards. Along with producers Scott Storch, PartyNextDoor, Louis Bell, and London on da Track, the dark, introspective affair also featured guest rappers Nicki Minaj, YG, and G-Eazy, as well as additional radio hit "Better Now." In between official full-lengths, Post capitalized on his steady ascent in the mainstream, hopping onto the Spider Man: Into the Spider-Verse soundtrack with previous collaborator Swae Lee. Their duet, "Sunflower," topped the charts across the globe and marked a slight, pop-smart shift in Post's production. "Wow," "Goodbyes" with Young Thug, and "Circles" all followed, firmly planting him in the Hot 100's upper reaches for much of 2019. This quartet of hits all appeared on his third effort, Hollywood's Bleeding, which recruited guests Da Baby, Future, Halsey, Meek Mill, Lil Baby, SZA, Travis Scott, and even Ozzy Osbourne. His second number one album, the set topped the Billboard 200 for at least five non-consecutive weeks, the most for any artist that year. While "Circles" became his fourth Hot 100 chart-topper at the close of the year, he received a pair of Grammy nominations for his other 2019 number one, "Sunflower," including Record of the Year. ~ Neil Z. Yeung & David Jeffries, Rovi