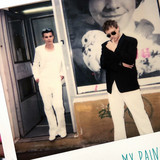 Northern Lite, an electro-rock group, carved out a respectable niche for themselves on the German music scene, not only via their record releases and remixes, but also via their own label, 1st Decade Records. Andreas Kubat and Sebastian Bohn -- a vocalist and DJ, respectively -- formed Northern Lite in 1997 in Erfurt, Thuringia, while guitarist Larry Lowe later joined in 2001, bringing an element of rock music to the group's style of electronica. Lowe eventually left the group in 2004, going on to form the solo act Fujimo, and was replaced by guitarist Sascha Littek. Northern Lite made their recording debut in 2001 on 1st Decade Records, their own Erfurt-based label; that year they issued several releases: Trusting Blind, Ways Ain't Working, Treat Me Better, and Trusting Blind Remixes -- in that order, each on 12" vinyl -- in addition to a full-length album, Small Chamber Works. Subsequent years brought many more releases on 1st Decade, including the full-length albums Reach the Sun (2003), Temper (2005), and Unisex (2006). In 2006 Northern Lite saw the first of their releases register on the German charts, when "What You Want" climbed to number 61 on the singles chart as Unisex climbed even higher, to number 29, on the album chart. The group returned to the German charts in 2007 with "Enemy," a collaboration with Chapeau Claque that peaked at number 51. Northern Lite also has a long list of remix credits dating back to 2001; among the more notable are Peaches' "Set It Off" (2002), Rammstein's "Rosenrot" (2005), Schiller's "Die Nacht... Du Bist Nicht Allein" (2005), and Yello's "Planet Dada" (2005). ~ Jason Birchmeier, Rovi