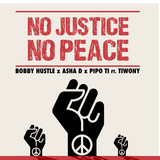 Asha D grew up in a world steeped in music and it was in 1992 that he went on stage for the first time as a drummer. He is a founding member of the label ARTIKAL MUSIC and of a backing band among the most experienced: ARTIKAL BAND, with which he accompanied many Jamaican artists (Sister Carol, Natural Black, The Heptones, Ras Shiloh, Jah Mali, Rod Taylor, Queen Omega .....), and "hexagonal" (Tiwony, Straika D, Lyricson , Baby G, MC Janik, Netna, Vybrate, Makajah, Kousi ...) including YaniSs Odua Asha D sings and writes from a young age ..... Her first appearance on a major project is the compilation "+ de coeur = soleil" initiated by Pierpoljak (Universal 1998). He then participated in projects like "Camarade" (Feuj) or "l’accent de la vérité" (Saber and Réalité anonyme) ... He also performed vocal vocals for several artists, notably Junior Delgado or Rod Taylor. Asha D recently released cuts like: Love non stop, My destiny, My savior, Gimme di Music (with Tiwony), Hallelujah..As a singer, he tackles all themes but remains mainly a "Conscious" artist. Asha D is also the producer and director of the Artikal Music label for which he produced titles with Sizzla, Mikal Roze, The Congos, Yaniss Odua, Tiwony, as well as many other artists.In 2018 He launched the site riddiminstrumental.com, site selling Reggae Dancehall instruments, which he adds a new Riddim to every week. He also composes for other labels and different artists.