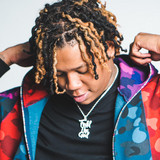 Hailing from the Steel City, rapper Fedd The God wants to use his gift of music to connect with people and spread positivity. Born James William Fedd Jr, the 26-year old grew up in the rough and less than ideal Northview Heights section in Pittsburgh, PA. “Growing up in Northview Heights, on Penfort and Manchester’s 1200 block, man, I’ve seen it all. The environment was rough and sadly what is now typical for so many young black males to see; murder, drugs, guns. We didn’t know anything else. I tried to keep to myself, for the most part.” Fedd’s musical journey began in 2005. He and a friend were jokingly making music on a computer. “Me and my boy Rico made a song called “Shoplifting” on Giant Eagle. As a joke. We were just fucking around. I didn’t really think anything of it. But I found myself going back to making music and writing raps, almost as a form of therapy whenever something happened or I saw something on the block.” But it took a real-life experience to light the flame inside of the Pittsburgh native to take music seriously. “It wasn’t until the death of my friend Trillzee that I started to take music seriously. He was making music and was about to crack off, so I felt the responsibility to pick up where he left off &amp; keep this shit going.”