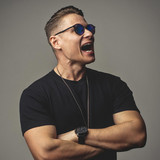 Very busy and talented DJ, musician and music producer. His musical career began in 2002, since then he waded through many various music projects, styles and music collaborations. After a long time of experience, due to the currently large hybrid of music genres, he calls himself a DJ playing electronic dance music, neatly selecting and combining different genres of club music. Tom is a co-founder of well-known house music project called Groovefore, whose tracks &amp; remixes were played in the biggest clubs in the world. His many years of experience and an innovative approach to music production earned it to be at the forefront of the house music scene. Every weekend he is doing what he loves most – playing &amp; selecting music for the party people. As a music producer he sucesfully remixed tracks from such artists as Duke Dumont, Martin Solveig, Alan Walker, Sigala, Bob Sinclar, Clean Bandit, Kygo, Armand van Helden, ZHU, Moby… His productions have appeared in such music brands as Hed Kandi Records, Hotfingers, Pornostar Records, InStereo Recordings, EMI Music, Vicious Recordings. In 2016 he founded his own music label &amp; blog Houve. As a DJ he visited the biggest polish cities, he was invited to perform at such countries like: Germany, Czech Republic, Malta, Estonia, Hungary, Russia, Lithuania. He also played on the big major Polish festivals such as Sunrise Festival, Sensation White, Global Gathering. In 2017 Tom becomes an official DJ resident of the Pacha Club in Poznan.