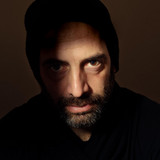 Adrian Crowley is a Dublin-based singer/songwriter with an introspective, moody tone. Crowley's music is steeped in the folk traditions of the 1970s, calling to mind storytelling songwriters such as Leonard Cohen and Nick Drake, with a strong, often central emphasis on lyrics. Increasingly as his career has progressed, his sound has incorporated electronic music; this influence has been reinforced by his ongoing relationship with producer Stephen Shannon of Dublin "folktronica" act Halfset, while his reputation as a multi-instrumentalist has led him to employ a vast array of acoustic instruments and guitar pedals. Crowley was born in Sliema, Malta but raised in Galway, in the west of Ireland, and moved to Dublin in the early '90s. In 1998, he spent a year writing and performing in the southern French city of Toulouse before returning to Dublin to record his debut album. A Strange Kind was recorded alone in a rented accommodation in the Dublin suburb of Rathmines and released independently in early 1999. Crowley's first music video, the 8-bit recording for "Capricorn," would receive welcome patronage from influential indie music show No Disco. This minor success would give Crowley the confidence to contact legendary producer Steve Albini to produce his second album. Much to Crowley's surprise, he accepted. An arts council grant paid for Crowley, drummer Thomas Haugh, and cellist Kate Ellis to fly to Chicago in 2001 to record the album, which was recorded and mixed within five days. When You Are Here You Are Family was released on independent label Bed of Rockets Records in October of 2001, and caught the ear of Ben Goldberg, owner of New York-based Ba Da Bing! Records. Ba Da Bing! released When You Are Here You Are Family in the U.S. in January of 2002, and gave A Strange Kind its first label release the following September. A U.S. tour followed in 2003, and included dates with the likes of Animal Collective and Black Swans, before Crowley returned to Ireland to record album number three. A Northern Country was released in July of 2004 by Misplaced Music in the U.K. and Ba Da Bing! in the U.S. That year he became involved with a collection of Scottish musicians dubbed the Fence Collective, based around the boutique Edinburgh label Fence Records and featuring the likes of King Creosote and James Yorkston. He also became involved with producer Shannon of Halfset at this time, and the pair recorded 2007's Long Distance Swimmer together. Released in December on London label Tin Angel Records, the album received an unexpected amount of critical attention, culminating in its being short-listed for the Choice Music Prize in early 2008. Buoyed by the record's success, Crowley pulled together a group of songs written around the same time as Long Distance Swimmer and recorded his most ambitious record to date, with Shannon again at the helm. Season of the Sparks was released by Tin Angel in Ireland in April of 2009 and won the Choice Music Prize -– Ireland’s Album of the Year Award. His follow-up, I See Three Birds Flying, was issued in September of 2012. May of 2013 saw the release of The Invaders Salute Captain America, a collaboration with James Yorkston in tribute to, and featuring the songs of, underground U.S. songwriter Daniel Johnston. After the pair played a series of shows, Crowley spent the remainder of the year playing his own gigs and writing new songs. His next album, Some Blue Morning, with contributions from the London string ensemble Geese, cellist Kevin Murphy, and singer Katie Kim, was released in November of 2014. Teaming up with American producer Thomas Bartlett (Magnetic Fields, Sufjan Stevens), Crowley's next release was unusual in that it was recorded entirely without his primary instrument, the guitar. ~ Dave Donnelly, Rovi