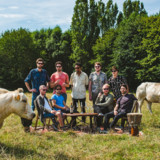 Kolonel Djafaar has built up a reputation across Belgium for their roof-raising live shows, reinterpreting the groove of Ethiopian jazz with a psych-rock edge, a mindblowing big band brass section, and a touch of Afrobeat. With their brand new EP for Batov Records, they have found their own path. Formed in 2016, the band earned their stripes across stages whipping crowds into a frenzy with a big band brass, Ethio-jazz meets Afrobeat sound, influenced by Mulatu Astatke, Budos Band, and Fela Kuti. Crowned ‘best live act’ at Belgium’s Jonge Wolven festival in 2017, Kolonel Djafaar sought to capture the power of their live show on their 2019 debut album, ‘Forgotten Kingdom’. With a reputation on stage spreading and support from Radio Mukambo and Tropicalidad, the ensemble’s popularity grew across Belgium and beyond. The ensemble took the road to some of Europe’s most exciting festivals, notably Ghent Jazz, host to the likes of Mulatu and Kamasi Washington. 2021 finds Kolonel Djafaar as they share their brand new ‘Cold Heat’ EP with the world; at such ease with the roots of their sound their creative impulse to forge a new, cinematic balance between a sharp, psychedelic rhythm section and four-piece brass unit. Released by Batov Records, whose sell-out releases are regularly supported by Gilles Peterson, Songlines Magazine, and Worldwide FM.