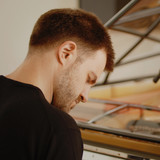 Carlos Cipa is a classically trained pianist, composer, and producer that made his mark on the modern classical world with his records The Monarch and the Viceroy (2012), All Your Life You Walk (2014), Retronyms (2019) and his latest album Correlations (on 11 pianos).   Cipa bridges genres and merges what seems contradictory, his work has always been distinguished by his curiosity. From the age of six he worked towards a career as a classical pianist - until he discovered the drums, played in rock bands, devoured ambient, pop, electronic music - and time and again classical music. While studying composition at the conservatory he quickly found himself constrained by restrictive conventions. Working in his own studio gives him the artistic freedom to overcome such boundaries and fuse indie, minimal music and avant-garde influences. He combines classical concepts with pop culture - without reservations or clichés. With only a few notes he creates beautiful orchestral music - intimate and cinematic at once. Besides his solo work he is a keen collaborator, creating music for film, TV, dance or theatre and released several EPs with other artists. In 2020, he formed a new project called Runden, a collaboration with Martin Brugger (bass) and Simon Popp (drums), both of contemporary jazz quintet Fazer. Their debut LP is a conceptual record reflecting on Minimal Music, Afrobeat, and Dub Techno of the late 90s.