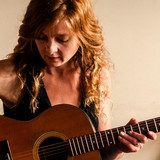 Jennifer Crook is a UK singer songwriter and multi-instrumentalist. Musically most at home in the world of folk, roots and Americana, her classic songwriting - with its vivid storytelling, beautiful imagery and poignant mix of hope and experience - will touch a nerve with many a soul. She has performed with her own band at festivals and venues across the UK. Collaborations include @Eddi Reader, @Boo Hewerdine, @Darrell Scott, @Eliza Carthy, @Miranda Sykes (Show of Hands), @Beth Porter, @Andy Davis (The Korgis) and @Snow Patrol. Jennifer’s finely crafted albums have received critical acclaim from BBC Radio 2, Bob Harris, the folk press and beyond. Her crowd-funded album 'Carnforth Station’ was produced at Peter Gabriel’s Real World Studios by Stephen W Tayler (Kate Bush) and she is currently working on her fifth album with producer Stuart Bruce (Band Aid, Van Morrison, Madeleine Peyroux) due for release in 2021. “I urge you to give this a listen. This is contemporary songwriting and performing at it’s best” Maverick***** “Heart-wrenchingly gorgeous music” Roots and Fusion “A vocalist of sublime power” fRoots