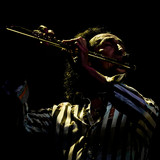 In 2020, eleven years after releasing Doin’ the D, an album paying dynamic homage to the music and magic of Detroit, Alexander Zonjic got back in the throwback R&B groove with the release of another infectious, high-spirited valentine to his beloved adopted hometown. Written and produced by Pieces of a Dream keyboardist James Lloyd, ”Motor City Sway” – the infectious lead single from Playing It Forward, quickly hit the Billboard Smooth Jazz chart and was one of the most added singles on the Billboard chart two weeks in a row. Ten of the eleven tracks on Playing It Forward were produced by keyboardist Jeff Lorber, who helmed the majority of sessions for Zonjic’s previous albums Reach for the Sky (2001), Seldom Blues (2004) and Doin’ The D. A native of Windsor, Ontario, Zonic is a 15-time Detroit Music Awards winner with deep and multi-faceted ties to and influence on the city. Piano legend Bob James discovered Zonjic in 1981 when the flutist was playing in Detroit’s famous Baker’s Keyboard Lounge. James invited Zonjic to join his band on and off on tour, and the keyboardist later was a producer (along with saxophonist Kirk Whalum) on Neon, Zonjic’s first major label album (Reprise Records) in 1990. James also appeared on the flutist’s 1993 follow-up album Passion, which featured a vocal track by Angela Bofill.

Zonjic is the artistic director and producer of more than 10 annual festival events in the region and philanthropist under the umbrella of his Hi-Falutin Music.