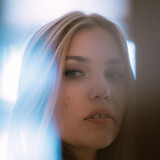 Caris Hermes (29) is a multi-award jazz bassist graduated from the Folkwang University of the Arts in Cologne. Supported by her mentor John Goldsby (WDR Big Band) and best connections in the german jazz scene, Caris has enjoyed a varied career as a performing artist and composer. Her debut EP “Human“ was released in 2018 where she claimed a new role as a quartet bandleader at the sold out PENG-Festival in Essen. Her fast and creative ability to transform complex musicial visions for changing bandleaders has positioned herself as the prefered choice in her category. As a sidewoman, she currently performs 150 domestic and international shows per year. Highlights include Paul Heller’s Next Level Jazz concert series, the Two Generations Quartet with Paul Heller

and Martin Sasse, shows with Hans Dekker as well as big ensembles like WDR Big Band,, Glenn Miller Orchestra® and the Landesjugendjazzorchester NRW. Her engagements on leading jazz platforms such as Moers Festival, Jazz Ralley Düsseldorf or Viersen Jazzfestival and multiple rewarded showcases, Caris’ collaborations has been rousing performances for countless jazzfans. Since 2011, Caris has recorded for Unit Records or fattoria musica, with nine albums under her belt including multi-genre projects with emerging jazz musicians and estabilished jazz players. Caris’ unique straight ahead style and her live presence has developed to an essential element of a modern jazz backline.