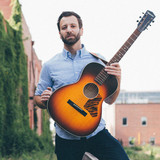 Durham, NC (by way of Michigan) flatpicking guitarist and songwriter Alan Barnosky expertly crafts Americana songs that detail the life of a modern troubadour. His critically acclaimed debut Old Freight, which was noted as being “a fantastic album, full of clever guitar work, excellent vocal performances, and punchy arrangements“ put him on the map as an artist to watch. Since its release he’s been a festival and showcase regular, appearing at the 2018 IBMA Songwriter Showcase, receiving an honorable mention at the Telluride Troubadour Contest, showcasing at the Southeast Regional Folk Alliance conference, and opening for genre mainstays The Steel Wheels, Robbie Fulks, and Charley Crockett. In addition to his work as a solo artist, he has performed with bands at the IBMA World of Bluegrass, Grey Fox Bluegrass Festival, and Bristol Rhythm and Roots. 2020 sees Barnosky poised to build on this momentum with the release of his sophomore work, Lonesome Road, an EP that spotlights instrumental prowess while remaining true to the honest songwriting, authentic delivery, and no-nonsense production for which he has become recognized.