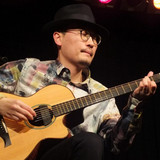 Ryohei Shimoyama is a Japanese guitarist, an international awarded melodic composer. He plays pieces that invite meditative relaxation. In doing so, he moves between the most beautiful soundscapes, which on the one hand have their roots in his Asian culture, but on the other hand correspond very strongly with European music. Ryohei received his first guitar as a gift at the age of 13. His musical preferences at that time included James Taylor, Neil Young and Crosby, Stills & Nash, and folk, rock and pop music of the 70s. But Ryohei was also influenced by jazz