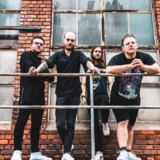 The Band with mouse damn!escape deliver their unique blend of Kickass-Rock from northern Germany. With their loud, energetic style four German guys have created a RocknRoll wall of sound delivered powerfully to the listener. damn!escape serve up a mix of harder, shredding rock songs and thrilling rock ballads guaranteed to provoke the most positive of emotions of its listeners. The name damn!escape came about from a resident mouse found in the guys first rehearsal room which took a liking to the boys’ instruments before frequently escaping them, hence the phrase ‘Damn, it escaped !’ later shortened to damn!escape.   The band was founded in Lüneburg, Germany in 2014 by a group of guys committed to traditional rock music. Despite a few changes in band personnel since, its commitment remains the same. Its current line up has been in place since 2019. In June 2018 damn!escape released their EP Dark Night Begins which was debuted at the Kieler Woche in northern Germany. In February 2021 there followed the announcement of their new EP Bad Treatment due to be released on 30th April, featuring the single of the same name as well as tracks from their early days.   More Infos: https://www.damn-escape.de