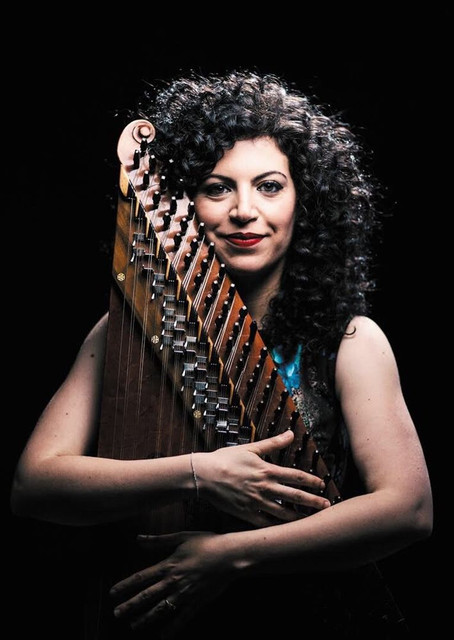 Maya Youssef is a globally renowned, innovative, and award-winning qanun player from Damascus in Syria. She has lived in the U.K. since 2012, is a regular on the BBC, and has been featured at the BBC Proms at The Royal Albert Hall as well as at other prestigious venues and festivals. Born in Damascus into a progressive family of writers and artists, Youssef started studying music at age seven at the Sulhi al-Wadi Institute of Music. Her earliest desire was to become a musician, and she has been singularly focused on that vocation her entire life. At nine, at the behest of her mother, she initially -- and in her words "reluctantly" -- chose the violin. One day while heading to the Institute with her mother, a taxi driver was playing a recording of the qanun. Youssef wrote in her website bio that it "blew my mind." She asked the taxi driver which instrument they were listening to and he told her it was the qanun. She told him she was determined to learn to play it. His reply shocked her and kindled a fire within her. He told her that since she was a girl, she should forget about playing the instrument because it was for men to play. Defiant, she told him she would learn to play the qanun! He laughed at her. The same day, she was sitting in her solfeggio class when the head of the Institute walked in and announced that a qanun class was open for enrollment. She signed up immediately with the full support of her parents; they replaced the violin they had bought her with a qanun. The qanun is a traditional Middle Eastern stringed instrument whose murky history links it to the ancient Egyptian harp and the psaltery, dulcimer, and zither. Youssef's qanun consists of a trapezoid-shaped hollow sound box made of walnut wood and 78 strings (26 sets of 3). At 12, Youssef won the Best Musician Award in the National Music Competition for Youth. She continued her studies at the High Institute of Music and Dramatic Arts in Damascus studying for a B.A. in Music and specializing in qanun; at the same time, she studied for a B.A. in English Literature at the University of Damascus. Gaining international renown, Youssef gave solo performances and founded the Syrian Female Oriental Group (SFOG) in 2003, along with five of her musician colleagues. The SFOG regularly performed at many important events in Syria, as well as in Asian and European cities. They took their music to Dubai, Beijing, Bologna, Amsterdam, Frankfurt, Athens, and elsewhere. Youssef completed her B.A. in music in 2007 after being trained in the classical Arabic, Western, and Azerbaijani Qanun schools, and in music from masters Salim Sarwa from Syria and Elmira Akhundova from Azerbaijan. That same year she moved to Dubai to focus on her solo career before being invited to teach at Oman's Sultan Qaboos University in the Department of Music and Musicology in 2009. In 2012, she applied to and was selected for the U.K. government’s Exceptional Talent program, whereby 300 artists are endorsed each year by Arts Council England and selected from around the world to migrate to the U.K. She undertook a PhD at the University of London's School of Oriental and African Studies (SOAS), looking at how music can be used as a healing tool and working with Syrian refugee children at camps in Jordan and Europe. Youssef signed to Harmonia Mundi at the end of 2016. In November the following year, her debut album, Syrian Dreams, was issued by the label. ~ Thom Jurek, Rovi