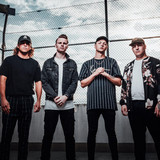 “People smile but they’re not happy”   NIOR are penetrating the web with their hashtag #spreadthesmile. Judging by their album title “Misfit” you might think that the four musicians are in fact societal misfits, yet they are at the very core of their scene.   Their first full-length “Nightwalker” was released in January of 2017 was well received by the press, the scene and their fans. German magazine “Metal Hammer” called NIOR “the heroes of tomorrow” and the band quickly made a new for themselves through international festivals and tours.   Instead of adhering to their recipe for success, the band changed direction and altered their style reminiscent of the sound of the millennium: Some of their grooves and arrangements might remind you of KoRn, Linkin Park, or even P.O.D. – NIOR call it “Nu Metalcore”. “With “Misfit” we want to make the kind of music that got us into playing – back in the day” says vocalist Arnold Karapiperidis. The risk of changing things up reaped big rewards: Their social media started blowing up and their first single “Paranoia” collected almost 50,000 plays in it’s first month on YouTube. The new record “Misfit” was produced by David Beule (Ex-Vitja) and was mixed and mastered by Aljoscha Sieg (Eskimo Callboy, Nasty, Any Given Day).   “Misfit” is about disappointment, crime, inner depths and living on the verge of society. “People smile but they’re not happy” remarks guitarist and graphic designer Marius Zschiesche.