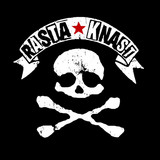 Rasta Knast stands for energetic punk rock with a large portion of melody and a dash of melancholy. The musicians are from Hannover / Celle. The preference for Swedish all-time punk bands like Asta Kask , Radioaktiva Räker or Strebers does not want to be denied, which is clearly reflected in the style of music. The band name Rasta Knast refers directly to the legendary Asta Kask. Since its foundation in 1997 numerous concerts at home and abroad (including Brazil, Japan, England, Sweden, Norway, Estonia, Spain) have been played. Record releases in Japan, Brazil and Sweden underline this. This "internationality" can also be heard. Although the band mostly sings in German, songs in Swedish, Portuguese and Spanish are also part of the repertoire. Rasta Knast are working completely D.I.Y. From the recordings in their own studio (D.N.A.) to the graphics, everything is produced by themselves. The current album Trallblut is available everywhere since July 2012. (CD version - Destiny Records, Vinyl Version - Plastic Bomb Records).