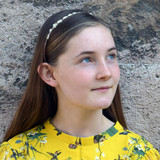 Alma Deutscher, born 2005, is a composer, violinist and pianist. She started playing the piano when she was two years old and the violin when she was three. Soon afterwards she started improvising simple melodies on the piano. When she was 6, she completed her first piano sonata, and at 7 she composed a short opera, The Sweeper of Dreams. Aged 9, Alma wrote a concerto for violin and orchestra. Aged 12, she completed her first piano concerto, which was premiered by the Vienna Chamber Orchestra. Between the ages of 8-12, Alma composed a full length opera, Cinderella, which has been performed in Israel, Austria, and in the USA, to international critical acclaim. She will give her Carnegie Hall debut in December 2019, with a concert dedicated to her own compositions. Alma’s new album, "From My Book of Melodies", is released by Sony Classical on Nov 8, 2019.