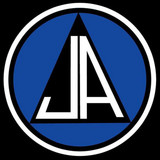 The hardest working band in Lansing, Jenn's Apartment embraces DIY aesthetics to the fullest, building their own studio and doing everything they do on their own terms.