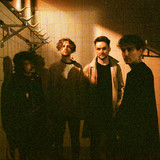 Writing a song called ‘MURDERER’ but ending with the words "L.O.V.E for everybody", you need to be a band that is aware of certain circumstances. First, political activism and criticism of the system is necessary to protect human lives. Second, the world is a networked community in its feelings of anger, confusion and compassion. And third, making dark pop music can be a tool to channel just that. Dark Pop is the balancing act between clean and distorted, between analogue and digital, between condemning and uniting, which BLACKOUT PROBLEMS – founded in 2012 and consisting of Mario Radetzky (vocals, guitar), Marcus Schwarzbach (bass, vocals), Michael Dreilich (drums) and Moritz Hammrich (guitar, vocals) – dares to do. A balancing act that seems to bring the tensions of contemporary ‘black and white’ debates and genre-spanning diversity to its dizzying pinnacle. The Shape of Pop to come? On DARK, their third full-length album which will be released on 01.15.2021, the band announces with deft clarity on the opener ‘MURDERER’ that anger has to be transformed. This anger is one that is fuelled by resentment about the state of our modern society which seems incapable – despite all the warnings that history and science have shown us – of creating a peaceful and sustainable place to exist. R.E.S.P.E.C.T. & L.O.V.E. for everybody!