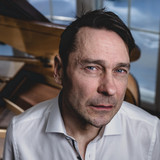 Hello there, I’m glad you found me. My name is Kepa Lehtinen and I am a composer from Helsinki. I was born in Helsinki, Finland in 1971 and began studying music in childhood, eventually learning to play piano, synthesizers, theremin, and drums. I went on to study Sound Design at Finland’s Aalto University and I have since written music for many films, commercials, and TV productions. My work has appeared in award-winning Finnish titles such as Kimmo (TV series), Almost 18 (feature film), and A Stone LeftUnturned (short film). I released my first solo album, Playing Theremin, in 2018. In 2019 I released Helsinki in November and 2020 album “It Is OK To Be Sad And Dark”. I am an avid skateboarder and i run a sound studio for film and tv in Helsinki. My new mini-album "Face plant" will be available 15.3.2021