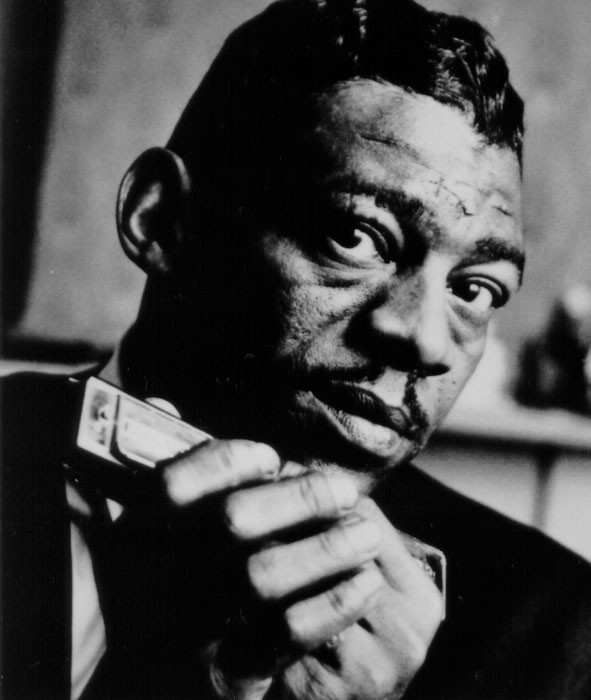 Who's the king of all post-war blues harpists, Chicago division or otherwise? Why, the virtuosic Little Walter, without a solitary doubt. The fiery harmonica wizard took the humble mouth organ in dazzling amplified directions that were unimaginable prior to his ascendancy. His daring instrumental innovations were so fresh, startling, and ahead of their time that they sometimes sported a jazz sensibility, soaring and swooping in front of snarling guitars and swinging rhythms perfectly suited to Walter's pioneering flights of fancy. Marion Walter Jacobs was by most accounts an unruly but vastly talented youth who abandoned his rural Louisiana home for the bright lights of New Orleans at age 12. Walter gradually journeyed north from there, pausing in Helena (where he hung out with the wizened Sonny Boy Williamson), Memphis, and St. Louis before arriving in Chicago in 1946. The thriving Maxwell Street strip offered a spot for the still-teenaged phenom to hawk his wares. He fell in with local royalty -- Tampa Red and Big Bill Broonzy -- and debuted on wax that same year for the tiny Ora-Nelle logo ("I Just Keep Loving Her") in the company of Jimmy Rogers and guitarist Othum Brown. Walter joined forces with Muddy Waters in 1948; the resulting stylistic tremors of that coupling are still being felt today. Along with Rogers and Baby Face Leroy Foster, this super-confident young aggregation became informally known as the Headhunters. They would saunter into Southside clubs, mount the stage, and proceed to calmly "cut the heads" of whomever was booked there that evening. By 1950, Walter was firmly entrenched as Waters' studio harpist at Chess as well (long after Walter had split the Muddy Waters band, Leonard Chess insisted on his participation on waxings -- why split up an unbeatable combination?). That's how Walter came to record his breakthrough 1952 R&B chart-topper "Juke" -- the romping instrumental was laid down at the tail-end of a Waters session. Suddenly, Walter was a star on his own, combining his stunning talents with those of the Aces (guitarists Louis and David Myers and drummer Fred Below) and advancing the concept of blues harmonica another few light years with every session he made for Checker Records. From 1952 to 1958, Walter notched 14 Top Ten R&B hits, including "Sad Hours," "Mean Old World," "Tell Me Mama," "Off the Wall," "Blues with a Feeling," "You're So Fine," a threatening "You Better Watch Yourself," the mournful "Last Night," and a rocking "My Babe" that was Willie Dixon's secularized treatment of the traditional gospel lament "This Train." Throughout his Checker tenure, Walter alternated spine-chilling instrumentals with gritty vocals (he's always been underrated in that department; he wasn't Muddy Waters or the Wolf, but who was?). Walter utilized the chromatic harp in ways never before envisioned (check out his 1956 free-form instrumental "Teenage Beat," with Robert Jr. Lockwood and Luther Tucker manning the guitars, for proof positive). 1959's determined "Everything Gonna Be Alright" was Walter's last trip to the hit lists; Chicago blues had faded to a commercial non-entity by then unless your name was Jimmy Reed. Tragically, the '60s saw the harp genius slide steadily into an alcohol-hastened state of unreliability, his once-handsome face becoming a road map of scars. In 1964, he toured Great Britain with the Rolling Stones, who clearly had their priorities in order, but his once-prodigious skills were faltering badly. That sad fact was never more obvious than on 1967's disastrous summit meeting of Waters, Bo Diddley, and Walter for Chess as the Super Blues Band; there was nothing super whatsoever about Walter's lame remakes of "My Babe" and "You Don't Love Me." Walter's eternally vicious temper led to his violent undoing in 1968. He was involved in a street fight (apparently on the losing end, judging from the outcome) and died from the incident's after-effects at age 37. His influence remains inescapable to this day -- it's unlikely that a blues harpist exists on the face of this earth who doesn't worship Little Walter. ~ Bill Dahl, Rovi