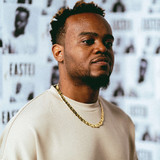 A raw, expressive singer and songwriter, contemporary Christian and gospel artist Travis Greene incorporates several genres into his sound. He made his full-length debut in 2007 with The More, later topping the Billboard gospel chart for the first time with his third album, 2015's The Hill. The single "Made a Way" stayed at number one on the Hot Gospel Songs chart for 13 weeks in 2016. Travis Montorius Greene was first driven to express himself through music as a youngster, following the death of his father. He had a brush with his own mortality as a child and was pronounced dead after a fall from the fourth floor of a building in Germany. In addition to developing as a musician, Greene worked as a youth pastor and worship director. His first album, The More, appeared in 2007 on his own Greenelight label. Greater strides were made with the Pendulum-issued Stretching Out in 2010; two of its singles, "Prove My Love" and "Still Here," landed on Billboard's Hot Gospel Songs chart. He reached number one with both "Intentional" and "Made a Way" from his third album and first for RCA Inspiration, 2015's The Hill. The Hill went to the top of the gospel albums chart and garnered Greene seven wins at the 2017 Stellar Gospel Music Awards. On the heels of those accolades, he returned with 2017's Crossover: Live from Music City, another gospel number one. It peaked at number 61 on the Billboard 200, his best placement to that point. Another live recording, Setlist, Vol. 1, arrived in mid-2019 and reached the gospel Top 20. Still with RCA Inspiration, Greene followed it with his fourth studio album, Broken Record, before the end of 2019. ~ Andy Kellman, Rovi