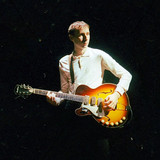 Hjalte Ross b. 1997, Denmark Hjalte Ross is a young Danish award winning artist who has a discography consisting of two albums, his debut Embody (2018) and his latest critically acclaimed Waves of Haste (2020). Both albums are based on personal reflections, and have seen him work with a wide range of high profiled producers, engineers, musicians, and artists. MOJO: "In Hjalte Ross, Denmark has a formidable export." UNCUT: "When you write an album in a remote norwegian lighthouse with a view of the Northern Lights, and hire Nick Drake’s engineer John Wood to produce it, you’ve evidently got a certain atmospheric vibe in mind. And delicately voiced Danish songwriter Ross achieves it in intoxicating style on this (Waves of Haste) second long-player." KEXP (About live performance): "On his own, Ross could hush a room with his breathtaking songwriting and quiet command of the stage. And while I’m sure that would be a special performance should he be in a solo set, the band was a welcome and astounding addition. Lush and serene, the band was also slyly ripping. It was a quiet confidence that would come in swells of feverish guitar leads, alto horns, and bowed instrumentation."