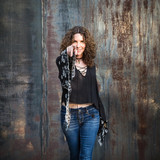 With Luna Negra and the Daughter of the Sun, Lisa Morales draws from a creative palette informed by the rhythms and colors of the Southwest, painted-desert skies of her native Tucson, Arizona, where she and cousin Linda Ronstadt grew up, to Houston, where she moved at 18, San Antonio & Austin, where she now lives. On each of its 11 tracks all but one of which were written by Morales with lyrics sung in English, Spanish and Spanglish. Producer Michael Ramos (Patty Griffin, John Mellencamp) also played accordion, trumpet and keyboards.