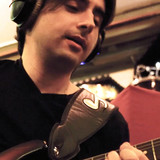 Davide Pannozzo has been described by critics as one of the most interesting artist’s of contemporary Blues guitar. His style is very much his own with splashes of Jeff Beck, David Gilmour, Eric Clapton and Jimi Hendrix. “There are very few artists these days that can inspire and are filled with inspiration and great ideas, Davide Pannozzo is one of them. When you first hear his music you know there is something special going on…” Will Lee (Late Show with David Letterman, The Brecker Brothers, 24th Street Band, …) Davide won the Emergenza European Acoustic Festival as Acoustic Solo Guitarist in 2009, followed by the Groove Master Award for Best Italian Blues guitarist in 2010, and most recently the Highland Uproarcompetition where he received hundreds of votes from listeners of the station in Scotland. His album Born Electric was released by EmArcy/Universal Music featuring very special guests: Robben Ford, Carl Verheyen, and David Garfield. His Jimi Hendrix tribute, “A Portrait of Jimi Hendrix” features off the floor recordings – with no overdubs –

it gets #1 on iTunes top100 Blues Album in Italy and iTunes top100 New Blues Release in the USA. His new album, “Unconditional Love” (released on Oct 19th, 2017) has been produced by Steve Jordan & Will Lee, with the participation of Ricky Peterson, Oli Rockberger, Shawn Pelton.