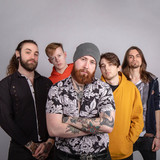 Melding styles of rock and metal from both sides of the Atlantic, Jet Fuel Chemistry (Re-Est. 2020) are the latest testament to the musical diversity of the Irish Republic. Jet Fuel's self-produced EP 'Sign of the Times' debuted August 7th 2020. Since then, the release has been praised by monolithic magazines like Rock Sound and Metal Hammer, promoted by industry giants such as Knotfest and Alternative Press and been featured on official Spotify editorial playlists 'All New Rock' and 'The Pit', racking up over a quarter of a million streams from around the globe.