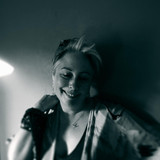 British Vocalist, Composer, Pianist and Producer Chloë March has been releasing her distinctive and genre-defying music since her first album ‘Snowdrop’ 2004 (on her own Powderkeg Records). Her luminous, velvety alto has been compared to Tracy Thorn and Liz Fraser, and her music to Kate Bush, Satie and David Sylvian but her sound is hers alone, encompassing dreampop, electronica, chamber-folk, ambient-pop and her classical roots. ‘One of those one-in-a-million voices… No one sounds quite like her, either vocally or musically… Ravishing’ textura ‘Exquisite… Such a great piano player, poet and vocalist.’ BBC6 Music March’s fifth album ‘Starlings & Crows’ (2020 Hidden Shoal/Powderkeg) featured in many Best of 2020 lists including #9 - Textura Top 20. Her background includes composing for Theatre and Dance and a Degree in Drama from Manchester Uni. After touring as keyboard player with Cousteau, March spent three years teaching herself how to mix/produce while writing her album ‘Divining’ 2008. In 2014 Australian label Hidden Shoal re-released her next album 'Nights Bright Days' to critical acclaim. ‘Blood-Red Spark’ (Hidden Shoal/Powderkeg 2017) continued her exploration of a rich seam in which songwriterly storytelling and radiant, sensual imagistic soundscape meet. The album was nominated for Best Album:Pop in the Independent Music Awards. As a Vocalist, March’s collaborations have included tracks with Jumpel, Liminal Drifter and Todd Tobias (producer Guided By Voices).