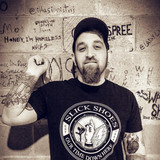 Brandon began playing in bands at the age of 10 in the fall of 2001. Since then, he's shared the playbill with artists such as; Sylvain Sylvain of the New York Dolls, Glen Matlock of the Sex Pistols, Man Overboard, Sponge, Taking Back Sunday, The Menzingers, letlive, Lucero, and dozens more. Brandon has been a regular guest of South Jersey and Philadelphia-area radio stations, college radio, newspapers, magazines, online blogs, and an appearance on MTV. In January 2012, Brandon started the alt-punk outfit Urethra Franklin and released the EP Welcome To Rio Grande, which received high critical acclaim as well as the hit single, "Hide The Bottle". December 23, 2014 was the release of Brandon's first solo EP Honey, I'm Homeless , which features fast-paced pop-punk/alternative with heartfelt lyrics and catchy hooks. His newest incarnation of his band is known as Honey, I'm Homeless with their album Remission: Impossible set for a December 25th, 2018 release. The Complete Brandon Smith Discography (all the songs written by Brandon in previous bands), will be available 8/7/18!