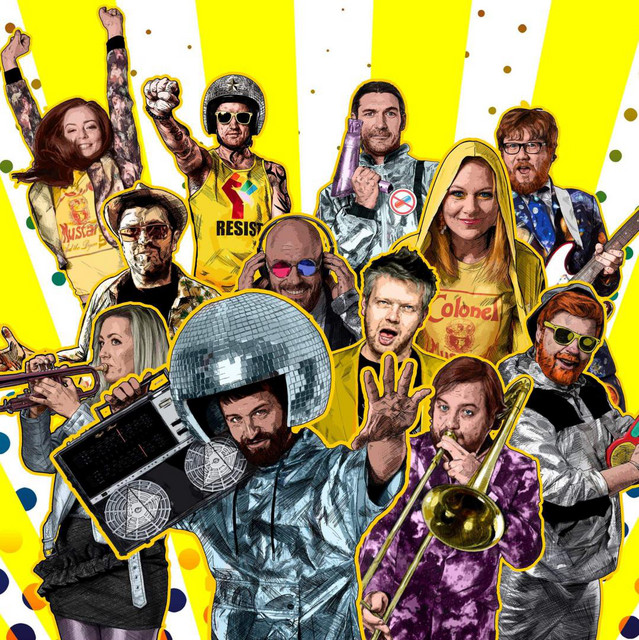 The ultimate festival band, Barrowland Hall of Famers and SAMA best live act Colonel Mustard & The Dijon 5 are famed for their genre hopping, yellow pollen count of happiness , with shiny disco ball hats, inflatable unicorns and crowd participation, fun and laughter at the heart of their performances from the DMZ Peace Train Festival Festival in Korea to Discover Celtic Connections 2020 gig in the Old Fruitmarket Glasgow, they are a party at its most outrageous and ridiculous. New album The Difficult Number 2 out on Button Up Records was released April 21 and reached number 11 in the official Scottish Charts, and 35 in the UK download chart as well as being number 1 Amazon bestseller. Lead single G.T. and follow up Ted Dancin' were championed by Amy Lamé on BBC 6 Music. Ted Dancin' reached number 7 in the Scottish charts and number 55 in the Official UK Physical Sales charts. The album features a whole host of guests including Still Game legend Gavin Mitchell on We are the Dinosaurs (and we are the Meteor) dance music icon Mary Kiani on This is Your House E.P (Radio Edit) with brilliant remixes on the singles by Micky Modelle, Shaka Loves You, Mickey 9s. Dopesickfly frontman Ant Thomaz and rapper David KayceOne feature on These are not the Drugs (you are Looking for) and the incredible Larry Love from Alabama 3 and guitarist Jon MacKenzie on Country As Muck. Expect the unexpected in the Dijonverse. Peace, love and dance like nobody's watching! See you in a field!