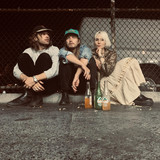 Oh yeah/Call me a dreamer again/I know you think it’s a messed up life/I don’t really care – Savant by ViVii, 2018 Even in the long ago distant times of two years ago, ViVii were defying (and denying) the challenging (or simply boring) realities of life. Even in the good old days of 2018, on only their second single ViVii had one thing in mind: dreaming up a better world through song. Clearly the Swedish trio were on to something special. Savant has been streamed 4.5 million times on Spotify alone. The self-titled album ViVii that followed has 14 million streams. ViVii’s sublime dreampop took them round the world on tour, from their production base in Uppsala, an hour north of Stockholm, all the way to the California of The Beach Boys. “Think of 1969 and you think of The Beach Boys era,” says Emil, the smiling enthusiasm all over his face as he recalls the pilgrimage the trio took to the beaches and neighbourhoods that birthed Brian Wilson’s teenage symphonies to God. That passion is there, too, in ViVii’s single Rendezvous, the second taster of the treats to come on the band’s second album, due in spring 2021. “We just grew up on that time and sound. All that jingle-jangle music, we all love it so much!” he adds with a laugh. “So it’s an homage to that time. It’s a romantic tribute to a place and a time and a sound that means so much to us.” The new single Fool Alone is once again proof of ViVii's unique sound!