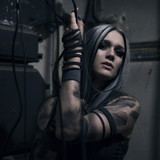 A new spark of hope has started glowing in the darkness of the rock music scene and with their untamed female lead vocals and haunting melodies the new wildfire named FOREVER STILL is starting to spread from Denmark. Hailing from the same musical shores as FLYLEAF, HALESTORM or IN THIS MOMENT, the band has been building a solid fan base since 2013 and toured tireless throughout Europe including with both LACUNA COIL and CHILDREN OF BODOM after releasing their fresh debut record entitled Tied Down on October 21st 2016 via. Nuclear Blast.   While many young rock bands with a charming front woman are often labeled as ‘industry products’ or ‘engineered’, nothing is artificial or marionette-like about FOREVER STILL – writing their own songs is obvious for Maja Shining and multi-instrumentalist Mikkel Haastrup, but the band also put their heart and soul into every other aspect affiliated with their music. Over the years they have booked their own tours, shot their band photos and music videos themselves, produced and mixed their new songs and have consequently climbed their self-constructed ladder to success. The band is currently in the studio working on their successor to Tied Down, which they plan on releasing in the spring of 2018 via. Nuclear Blast.