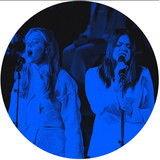 A Swedish indie folk duo with a devoted international following, First Aid Kit blend the bright vocal harmonies and pastoral, contemplative songwriting of sisters Klara and Johanna Söderberg. After receiving radio play in Sweden as teenagers, they went on to chart across Europe and in the U.S. and Australia with albums such as The Lion's Roar (2012) and Ruins (2018). Often accompanied by a backing band, the group has staged Leonard Cohen tribute concerts and covered other musicians including Simon & Garfunkel, R.E.M., and Kate Bush. Hailing from suburban Enskede and taking influence from the likes of Fleet Foxes and Joanna Newsom, the Söderberg siblings began composing songs as young teenagers in 2007. The home-recorded "Tangerine" enjoyed airplay on Swedish radio later that summer, and the debut EP Drunken Trees helped expand the girls' audience upon its release in April 2008. The London-based Wichita Records reissued Drunken Trees one year later, bolstering its track list with a reverent Fleet Foxes cover and three additional songs performed live in a Swedish forest. The duo then set to work on a full-length album, balancing schoolwork with the recording sessions. The Big Black & the Blue was released in 2010, and was followed by a request from Jack White to record a single at his Third Man Studios, which resulted in their cover of Buffy Sainte-Marie's "Universal Soldier." They struck up a friendship with Conor Oberst and appeared live with Bright Eyes on tour before they entered the studio with the band's guitarist Mike Mogis for The Lion's Roar, which arrived in early 2012. The lead single "Emmylou" was listed by Rolling Stone as the tenth best single of the year, and the LP debuted at number one in Sweden. It also charted in several other countries, including the U.S., where it reached number 65 on the Billboard 200 and the Top Five of the Americana/folk chart. The sisters' creative relationship with Oberst was cemented in 2014 when they sang backing vocals on his solo album Upside-Down Mountain, and that same year the duo released Stay Gold, their first album on major-label Columbia. It hit number one in Sweden and Norway, and charted in the Top 25 in several European countries, the U.S., Canada, Australia, and New Zealand. Stay Gold went on to win Album of the Year at Sweden's Grammis. After two years of touring, festivals, and international TV appearances (including a cover of Simon & Garfunkel's "America" for The Late Show with David Letterman), First Aid Kit headed to Portland, Oregon to record their fourth LP. Featuring production by Tucker Martine (My Morning Jacket, the Decemberists) and backing musicians such as R.E.M.'s Peter Buck, Wilco's Glen Kotche, and Midlake's McKenzie Smith, the resulting Ruins was informed by the aftermath of Klara's broken engagement. It arrived via Columbia in early 2018 and became another international chart success, reaching number one in Sweden, the Top Five in the U.K. and Norway, and number 47 in the U.S. Comprised of songs recorded during the Ruins sessions, they followed it with the aptly titled Tender Offerings EP in September of the same year. ~ Andrew Leahey & Marcy Donelson, Rovi