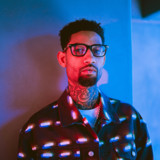 Mixing hip-hop and R&B like Chris Brown and Fetty Wap merged into one, Rakim "PnB Rock" Allen got his moniker from Pastorius and Baynton Streets in his hometown of Philadelphia. He debuted in 2014 with the mixtape RnB, its title referencing Rock's blend of R&B and rap. The RnB2 mixtape appeared early in 2015 and caught the attention of Atlantic. The Warner-affiliated label signed Rock and released RNB3 that same year, along with his single "Jealous" featuring Fetty Wap. The two released a mixtape, Money, Hoes & Flows, in 2016. Throughout the year, Rock made a multitude of guest appearances on tracks by Kodak Black, YFN Lucci, Kevin Hart, and others. GTTM: Goin Thru the Motions, was released by Atlantic in early 2017; originally referred to as Rock's first proper album, it was later considered a mixtape. Wiz Khalifa, Ty Dolla $ign, and A Boogie wit da Hoodie all made guest appearances. The release was a success, hitting the Top 30 of the Billboard 200 album chart. That summer, he was named one of XXL's 2017 Freshman Class before issuing the single "Time." Catch These Vibes, Rock's actual debut studio full-length, appeared in November of 2017, and hit the Top 20 of the Billboard 200. The following year, he appeared on XXXTentacion's track "Smash!" and "S.W.I.N.G." with Tory Lanez and Trey Songz. Official sophomore full-length Trapstar Turnt PopStar arrived in 2019. PnB's 2020 single, "Ordinary," was a collaboration with Pop Smoke. ~ David Jeffries, Rovi